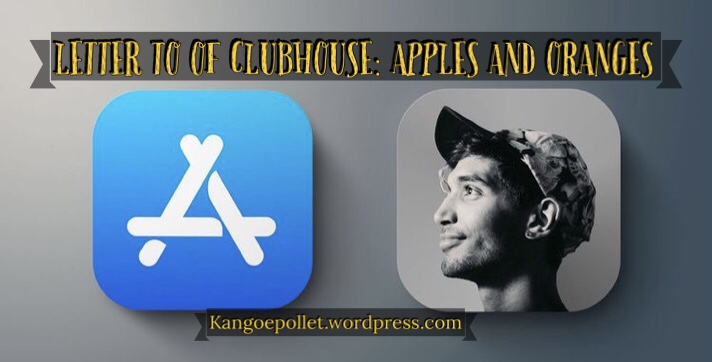 Today I compel my thoughts to write a letter to Becoming the muse concerning Clubhouse. Hoping you’ve read Of Clubhouse: Apples and Oranges piece by Beaton, you can proceed to the letter.

First of all, in the Kenyan way “Habari yako, mimi niko tu, najaribu.”
I had a thrill reading through Of Clubhouse: Apples and Oranges piece and you so well explained my exact frustration with Clubhouse but also I learned a lot and if anything else that you pick out, of this letter is I agree with you.

I am also from a country where there is a sea of Android phones and an iPhone isn’t common by a long shot. I also happen to reside in a country where an iPhone is very common we will soon start taking pre-orders for an iPhone 13. I even have an iPhone 11 and I would not trade it for any android phone for very many reasons, I could share in a separate email to you and yes I do have the Clubhouse app installed for three months now.

I got introduced to the damn App by my friend and colleague in Germany, but it was not an invitation. She was equally curious about Clubhouse. I am yet to get an invite and I have tried, by following various hosts and doing enough stalking on Twitter on how to get in on just one Clubhouse. Honestly, with Clubhouse I have done all stages of grief, I have moved from curiosity to denying it exists, to pain and anger that here I am in my almost mid 30’s and having lived in three countries, I still have no such exclusive and high rolling friends to invite me. I’m almost getting depressed ( you can tell by the stalking right?, I mean I read almost every comment on every tweet). I skipped some of the other potentially beneficial stages of Clubhouse grief and now I am in acceptance but without hope and no interest at all, anymore. Therefore, you can tell I fully agree with you. Clubhouse and any other ‘Exclusive’ app anyone ever creates should never be labeled as ‘on beta’ but they should outrightly say ‘you poor’. “You are poorly connected, sorry, you are not in for a hangout, find yourself a commoner app”.

To future developers, as I also have a career of over ten years now in tech, the world is your playground, you know that, don’t be so picky, I mean for an app like Clubhouse, the podcast, unless it’s one way, like delivery only and its fine if it’s exclusive. However, if not and it relies on shared opinions, I think commoners like us could add some level of value to the content being delivered. You know so the select few people aren’t in such a bubble.

Anyway, Becoming The Muse, that is as far as I will agree with you because the Mickey Mouse clubhouse and its clowns, you just mentioned are no less similar to Clubhouse.
I know you meant to mean, anything else is way better than Clubhouse, however, using Mickey Mouse Club as the example is a bit off with me. You see: First of all, it’s hard to relate especially if you never watched Mickey Mouse Clubhouse when it was free to air on local channels, to know that the club doesn’t exist in the first place. Secondly, even if it did, ‘Mickey Mouse Clubhouse’ would be a very good franchise for Disney world, which means it also would have exclusive as well. I mean if you consider Disney world exists in the US and Europe and the Disney channel is not in Africa either.
You start this discussion by defining what a Clubhouse is, and if you just stuck with a building aka a bar, or sports club I would be in on your rant. And even then, I would still be slightly hurt as what about my dear Mother who does not drink. And well, we aren’t that wealthy off to also pay membership in a golf or tennis club? Should her Clubhouse be confined to just her ‘Chama’s’ and when she chooses to expand her clubhouse be locked out of them?
You see my issue with this whole society, We keep creating more and more lean groupings of people. Like has racism not taught us anything? Do we have to form groups to include or exclude people from conversations, engagement, and way of expression?